Slow Down for Safety

People have always known the life-saving importance of motorised vehicles travelling slowly. More than a hundred years ago, the first cars in Britain were required to have a person walking in front of them waving a red flag, and the maximum speed was 3km/h. It was recognised that motorised vehicles were heavy and hard and could not stop immediately, and could hit and crush people. It's not safe to hit at any speed. Consequently, the first cars had to go very slowly indeed.

As vehicles were allowed to be driven faster, the danger increased exponentially, people were hit and inevitably injured or died.

The objective of any driver trying to be safe is to be able to stop in time to save a life. Slower speeds give the gift of time.

Thinking time: it's a matter of brain function

Braking time: it's a matter of maths

Imagine a child falling head first out of a window 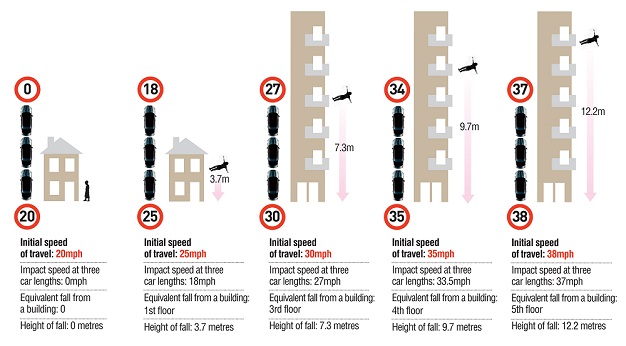 Imagine a block of four flats, one on top of the other. Let's call the flat at street level the ground floor. The floors count up from there; first floor, second floor, third floor.

As we've said above, a car travelling at around 50km/h (30mph) would not be able to stop in time if a child stepped out three car-lengths ahead, and would hit the child at an impact speed of 27km/h (18mph).

If a child is hit by a car at 27km/h (18mph) it is the equivalent of them falling head first from the flat at the top of the building, on the third floor (7.3 metres). (Many deaths of pedestrians are head injuries, often against windscreens. [1] [2])

50km/h is not a safe speed where people live.

AEB (autonomous emergency braking) systems are increasingly being fitted to modern vehicles. In some countries it is a legal requirement on some vehicles. Sensors detect that there is a chance of a collision ahead and automatically apply the brakes. This technology is a fantastic advance that urgently needs applying to all vehicles.

However, whatever technology a vehicle has, the basic fact remains that the faster and heavier the vehicle, the longer it will take to come to a standstill in an emergency, whether the driver is applying the brakes or the vehicle is doing it automatically.

Braking distances are much longer for larger and heavier vehicles, and in wet or icy conditions, so the distances shown in the chart are a minimum.

Safe streets means traffic-free streets. People need to be given back their mobility through segregated space for cycling and walking. However, if space is shared with traffic, the safest speeds are the slowest speeds. No community should have a speed limit of above 30km/h and 20km/h is safer still.

The World Health Organisation says that in areas where ‘motorised traffic mixes with pedestrians, cyclists, and moped riders, the speed limit must be under 30 km/h (20mph)’ due the vulnerability of these road users. [3]

Analysis of traffic casualties in London from 1986-2006 showed 20mph zones, introduced with traffic calming measures (such as speed humps and chicanes), reduced deaths and serious injuries by 42%.[4]

There is a growing international social movement calling for 30km/h (20mph) speed limits where people live. The 20's plenty (20mph) and We love 30 (km/h) campaign is taking off globally. The organisation 20's Plenty For Us has enthused communities all over Britain and other countries to campaign for reductions in their speed limit with great successes, with many limits reduced to 20mph.